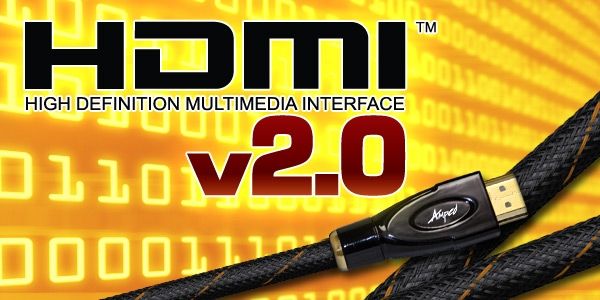 HDMI Version 2.0 brings many new functions and capabilities to our home theatre systems. But what does it mean for cables? We explore the changes and answer the most important questions of all: Do you need a new HDMI cable?

What are the new benefits of HDMI version 2?

Other features also introduced but not likely to impact home theatre users are added support for up to 32 audio channels and 4 audio streams, and support for up to 1536kHz audio. It also supports a new aspect ratio at 21:9 for really wide screens!

Are there special cables for HDMI v2.0?

While few of us get around in duster coats and cowboy hats these days, there are still a few snake oil salesmen around who like to pretend that changes in hardware equal a change in cabling. The fact is that there have only ever been two versions of HDMI cabling as certified by the HDMI industry body. The first was ‘Standard’ HDMI from back in 2002. It could handle Full HD 1080p/60Hz video and 8 channel LPCM audio. The next was ‘High Speed’ HDMI from 2007 onwards.

High Speed HDMI cables are capable of supporting every single feature of HDMI right up to HDMI v2.0.

How can the same cable support all the new features?

Because at their core, cables are just copper wire with fancy plugs on the end. Sure, they have shielding and insulation and twisted pairs and what-not, but the copper that transmits the electrical data has always been there.

All High Speed HDMI cable have contained 19 discreet links of copper wire – one for each pin inside the socket – the physical cable has not changed at all. The big difference comes inside of your Amplifiers, TVs, DVRs, Blu-ray players and computers. They’re the pieces of hardware which must be HDMI v2.0 compliant.

To learn more about which cables have true versions and which ones don't, we have an article just for you!

Do I need to replace my cables for HDMI Version 2.0?

If you already have a HDMI cable that you know is officially certified as a High Speed cable, then you don’t need to make a new purchase. In fact, all of the HDMI Male to Male cables Cable Chick has carried since mid to late 2007 are High Speed.

If you’ve purchased from us in the past, you’re sorted for the next generation of home theatre gear.

If, on the other hand, you’ve purchased an unbranded cable from a very cheap local or overseas seller, and you don’t know whether or not your cable is High Speed, it’s probably time to consider replacing it, particularly if you're interested in future-proofing your equipment to make use of the new abilities afforded by High Speed HDMI.

How much should I spend on a new HDMI cable?

We’ve written a whole article on when you should save your dollars and when you should invest in the best. If you need some help determining the right cable for your needs, it’s worth a look!

PREVIOUS ARTICLE What you need to know about Active vs Passive cables, switches & splitters
NEXT ARTICLE Going The Distance - A Guide to Maximum Cable Lengths