Incorrectly made DisplayPort cables can cause boot issues on PCs. Find out why this was ever a problem and how correctly manufactured cables aren't affected.

The Problem: Boot Loops and Hanging When Using DisplayPort

Turning on your PC (especially a new one) and having it constantly reboot or hang during start-up can be pretty harrowing even for professional builders. In some cases dating back to the early 2010s, dodgy DisplayPort cables were found to be the culprit. This led to many DIY PC enthusiasts abandoning DisplayPort in favour of HDMI which didn't suffer from the same problem, but also didn't have features like G-Sync or Freesync.

In this case, the difference between a bad DisplayPort cable and a good one came down to how it was wired. Specifically, Pin 20. Scroll down for info on what Pin 20 is designed to do and why it caused boot issues in dodgy cables. 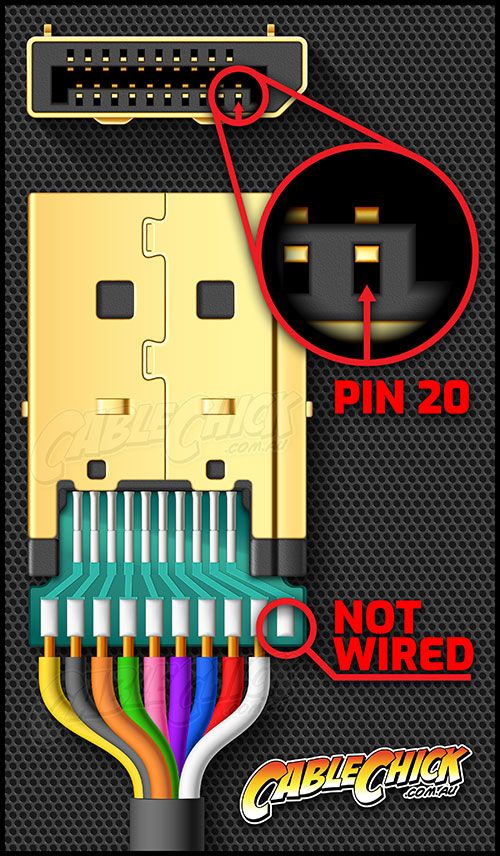 What to do if Your PC is Still Affected

All the DisplayPort cables at Cable Chick are wired correctly and don't cause issues on PCs at boot time. In many instances, upgrading to a modern, properly-built HBR2 cable will also provide benefits in faster speeds so you can leverage higher resolutions and refresh rates on new hardware.

Many GPU manufacturers also provided their own workarounds to the issue in order to protect their equipment from damage and allow the system to boot as normal - even on a bad cable. If you have a video card produced after 2017 you're probably not affected. There are some traces on the internet of a time when Nvidia offered software hot-fixes on some older model cards which also targeted this issue, but any such updates have long since been incorporated into driver packages. We have also found that older model ATI video cards are more likely to be affected.

If you find yourself working with an older PC with hardware that is still affected by boot issues when using DisplayPort, the safest fix is a new, properly-made cable, to prevent the risk of any damage to your expensive graphics card.

DisplayPort Pin 20 - What Does it Do When it's Working?

Pin 20 delivers power at 3.3V/500mA. This juice is intended to run accessories which don't plug into external (i.e. mains) power. Think DP to DVI dongles and the like. It was just enough power to run a small chipset in an active adapter or perhaps give a wake-up signal to specialty hardware like low-power displays. Pin 20 power has a lot of potential applications, but there aren't many devices on the market which leverage it.

When a DP adapter is being powered, there is no backdrive issue.

At the dawn of DisplayPort, when people were upgrading their desktop but keeping their old monitor, adapters were hugely popular. Power from the Graphics Card either ran, or was ignored by, the adapter and power from the Monitor didn't exist because it wasn't using DisplayPort.

Why Does DisplayPort Pin 20 Cause Problems?

This 'backdrive' condition happens because Monitors are never really off when in standby, so they feed power out to the Graphics Card when it isn't expecting any. This led to the stalls, hanging, freezing and constant rebooting that plagued DIY builders from the early 2010s all the way up to around 2016.

With a badly wired DisplayPort cable, there is a boot failure.

A quick workaround was to disconnect the monitor before powering up. The computer would then be able to get into the Operating System, and the monitor could then be reconnected and work fine. It was only during the initial hardware start-up phase (known as a cold-boot) that the power delivery 'fight' between GPU and Monitor caused problems. This workaround was not recommended because it still left what was effectively a short circuit in place during hardware operation, which could lead to permanent damage.

How widespread is the problem?

From our experience, we've found that many retailers of DisplayPort cables aren't even aware of the Pin 20 specifications, and how their cables should be wired. Just how do we know this? Becuase we decided to run an experiment to see just how widespread this problem might be. We ordered a 2m DisplayPort cable from 6 major Australian AV and computer cable retailers, only to find that half of the cables were NOT wired correctly!

Feel free to contact us if you have any more DisplayPort questions!

PREVIOUS ARTICLE Are You Using the Wrong HDMI Cable?
NEXT ARTICLE 16 Essential Tips to Enhance your Home Entertainment