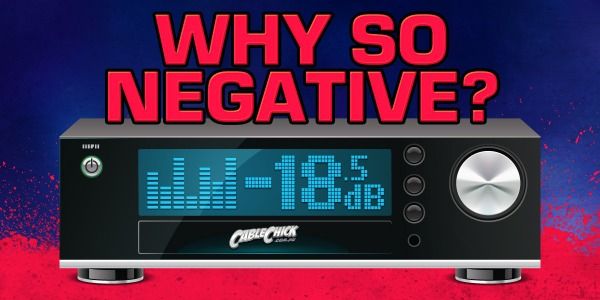 Have you ever wondered why your home theatre receiver shows volume as a negative number? Wonder no more!

It's all about the Decibels

Chances are you've heard of decibels before - they're used to measure a variety of power ratios that relate to sound levels. Decibels are most often used to describe the volume of things we hear, such as 140dB for a jet engine, or 60dB for the volume of conversational speech, and so on.

For things that humans hear, dB is measuring the Sound Pressure Level (dB SPL), with 0dB being the lower limit of human hearing and 120dB being our threshold for pain.

When it comes to our home theatre equipment, though, our amplifiers are receiving a digital audio signal that has a dynamic range based on its sample rate. So, rather than a physical sound pressure level, it just has a bunch of zeroes and ones that are converted to voltage and sent to the speakers. How much voltage? Ask the Volume Knob.

More on decibels
Decibels are used to compare the amplitude of two audio signals or power/voltage levels. If they are the same amplitude, then they are said to be 0dB apart. There are several types of decibel, including dBm, dbV, dBu and dBFS, but they're out of scope for this quick tutorial.

Back in the day, most volume knobs on amplifiers went from 0 to 10. Some went from 0 to 100. Others went all the way to 11. The lower the number, the lower the volume, all the way down to full mute. These knobs usually worked electrically, changing Volume Units (VU) rather than dB. You'll still find knobs like these on some types of pro audio equipment, but in a modern home theatre it'll be much less common.

These days, home theatre amps have digital knobs. Some of them turn through an arc, and others are auto-centering. They generally turn slowly or have some resistance which helps in making tiny changes very easy. These knobs are telling a computer or circuit to adjust the output voltage and, as we all know, computers work on math. If a computer starts at 0 and multiplies by 10, the answer is still 0, so the point of reference has to be different for digital audio systems.

Some modern knobs may still be marked with numbers, but they'll be 'backwards' compared to the old school devices, with 0 as the loudest setting and 10 or 100 as the softest.

Put simply, home theatre amplifiers use 0db as a reference level for how much volume they can output before distortion becomes audible (or the loud parts of the sound wave are clipped).

This doesn't have to be a hard limit - some home theatre amps have the headroom to happily go into positive numbers without the average listener hearing distortion, but generally you'll be having a nice word with some police officers if you run your speaker system at this sort of volume.

By starting at 0db (the highest safe power level), we can make accurate changes to how loud the volume sounds. At any point you can add 6dB to double the percieved volume, or remove 6dB and halve it.

1dB is loosely defined as the smallest change in sound level that is noticeable to your average human ear, but because dB is logarithmic, a 6dB increase is double the volume and requires four times the power to achieve.

Don't worry if the comfortable listening level on your home theatre system is -40dB, but your mate listens to his system at -16.5dB - these values are all equipment and source dependent. DVDs typically sound softer than Blu-rays and that dodgy movie rip you grabbed from the internet may have a shockingly bad volume level.

Your speakers and amplifier will make the most difference, though. Unless you're mixing audio for a musician or mastering a Hollywood blockbuster, it only matters how it sounds to you. Turn the knob clockwise and things get louder - that's really all there is to it!

Still stuck in the past?

Decibels are tough to wrap your head around. We may have made mistakes in trying to simplify this concept for the non-techies among us. So if you have any questions or corrections, please contact us - we love learning!