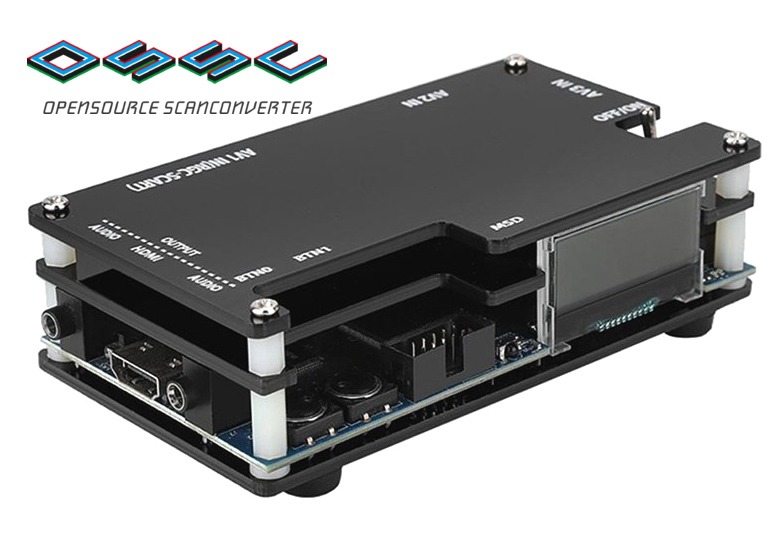 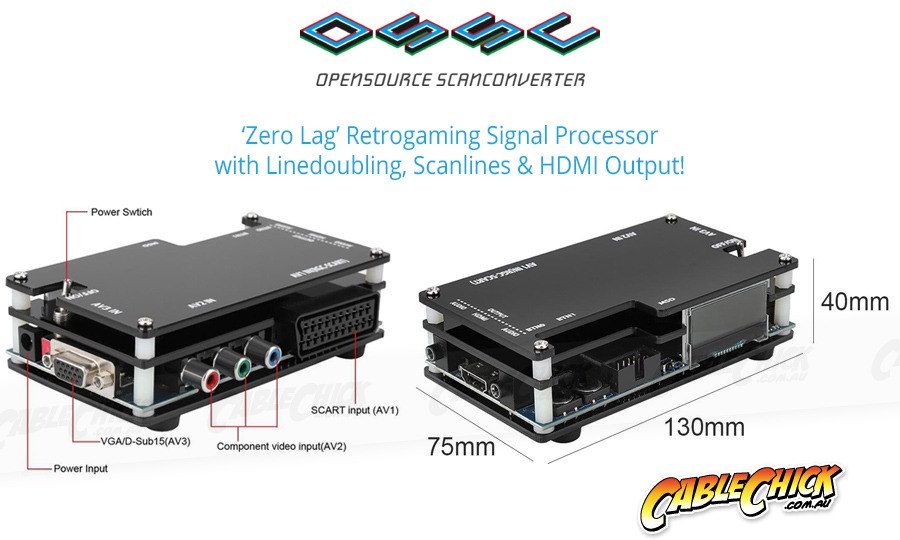 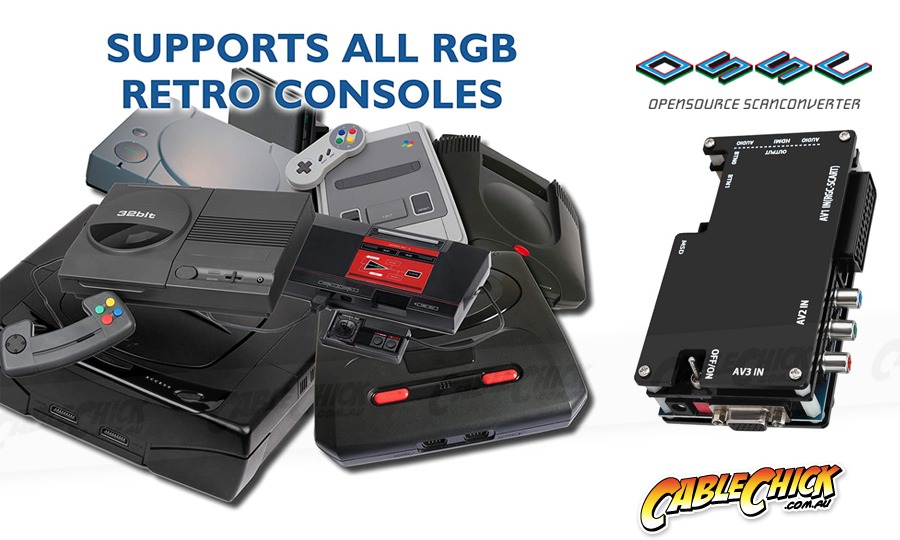 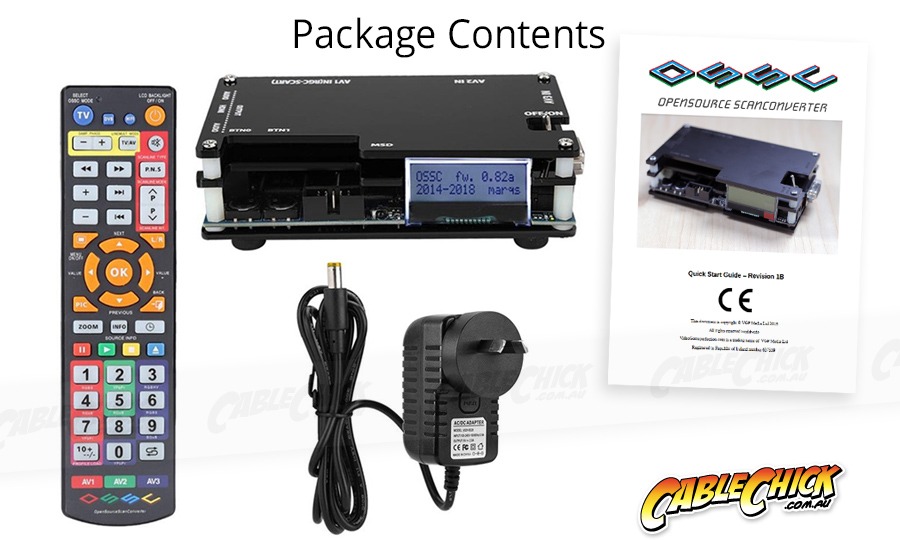 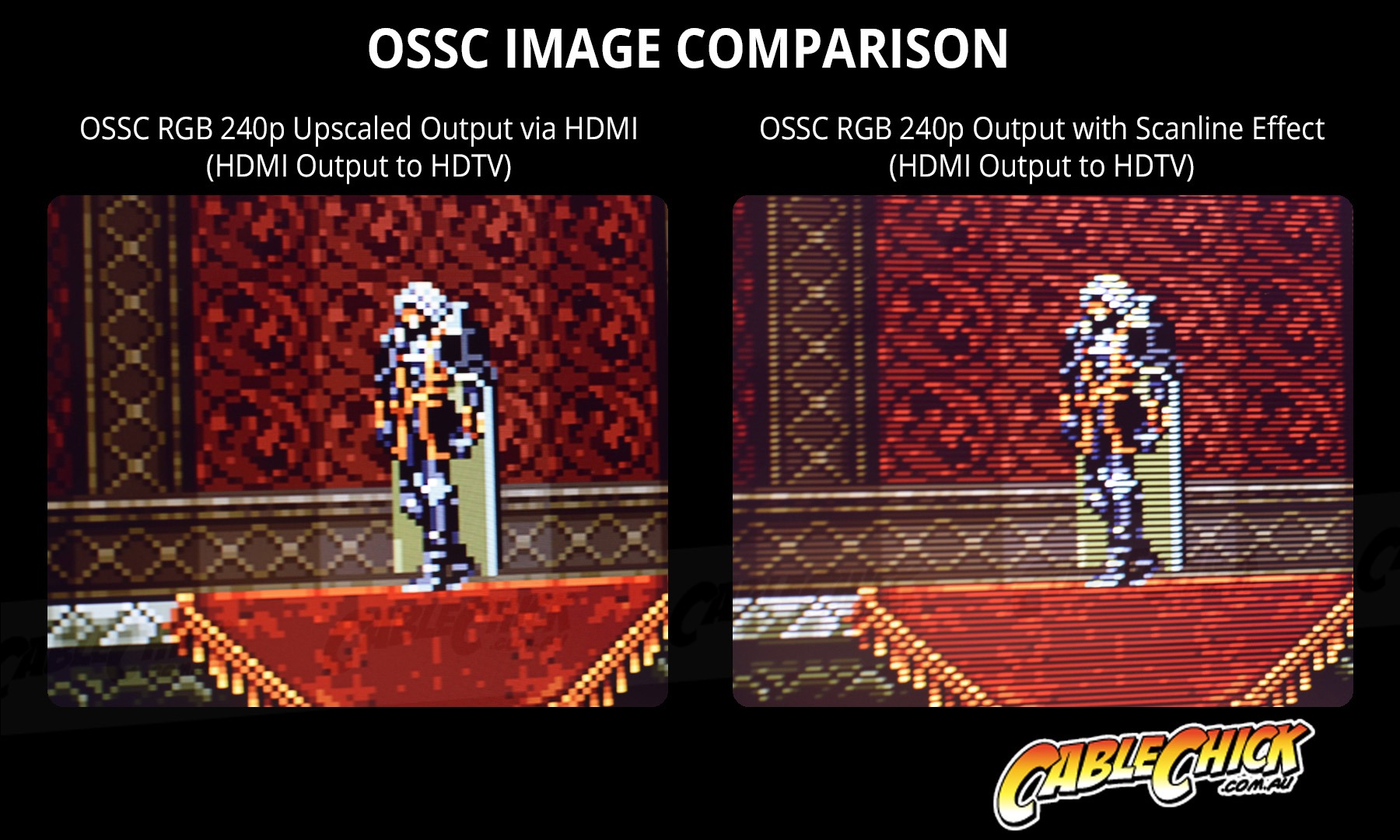 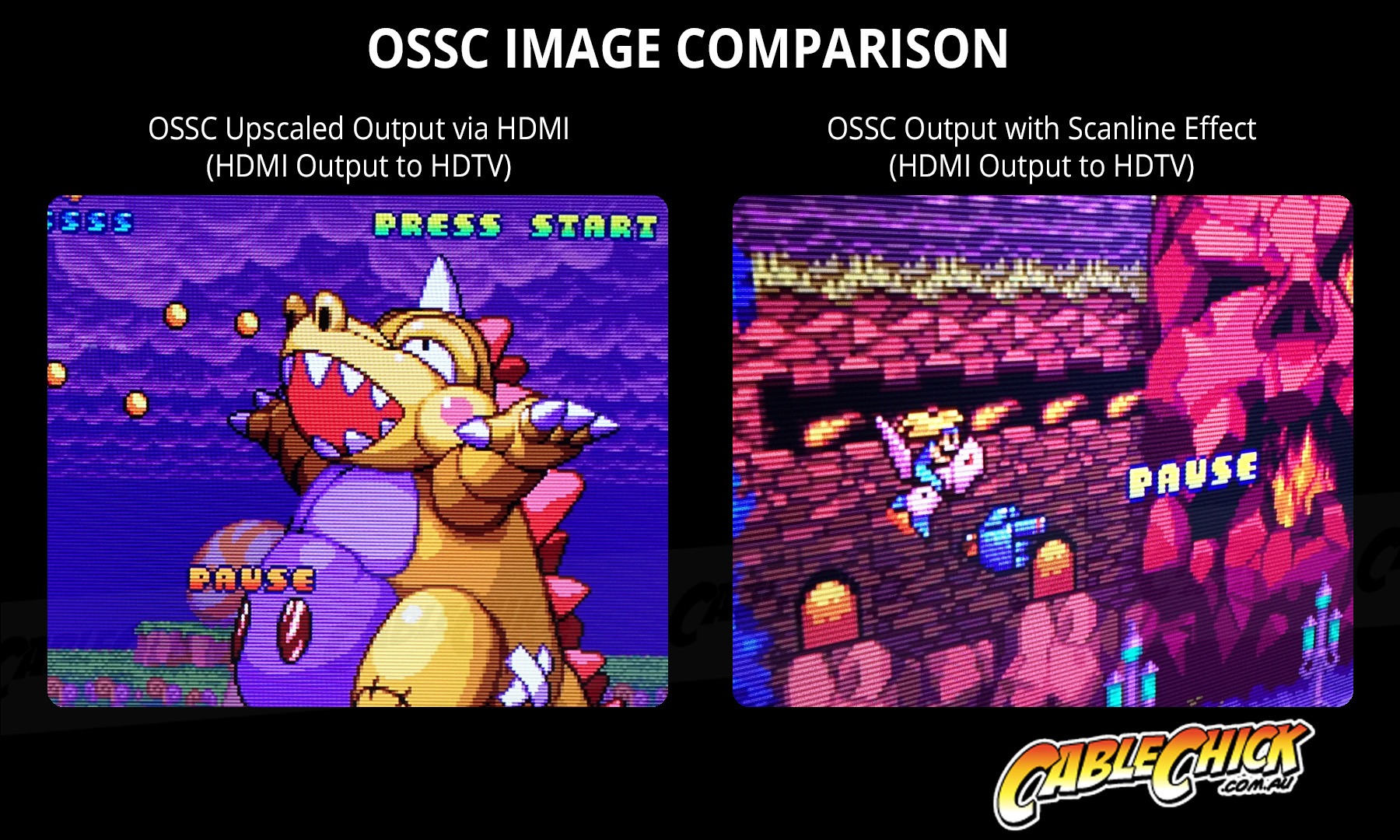 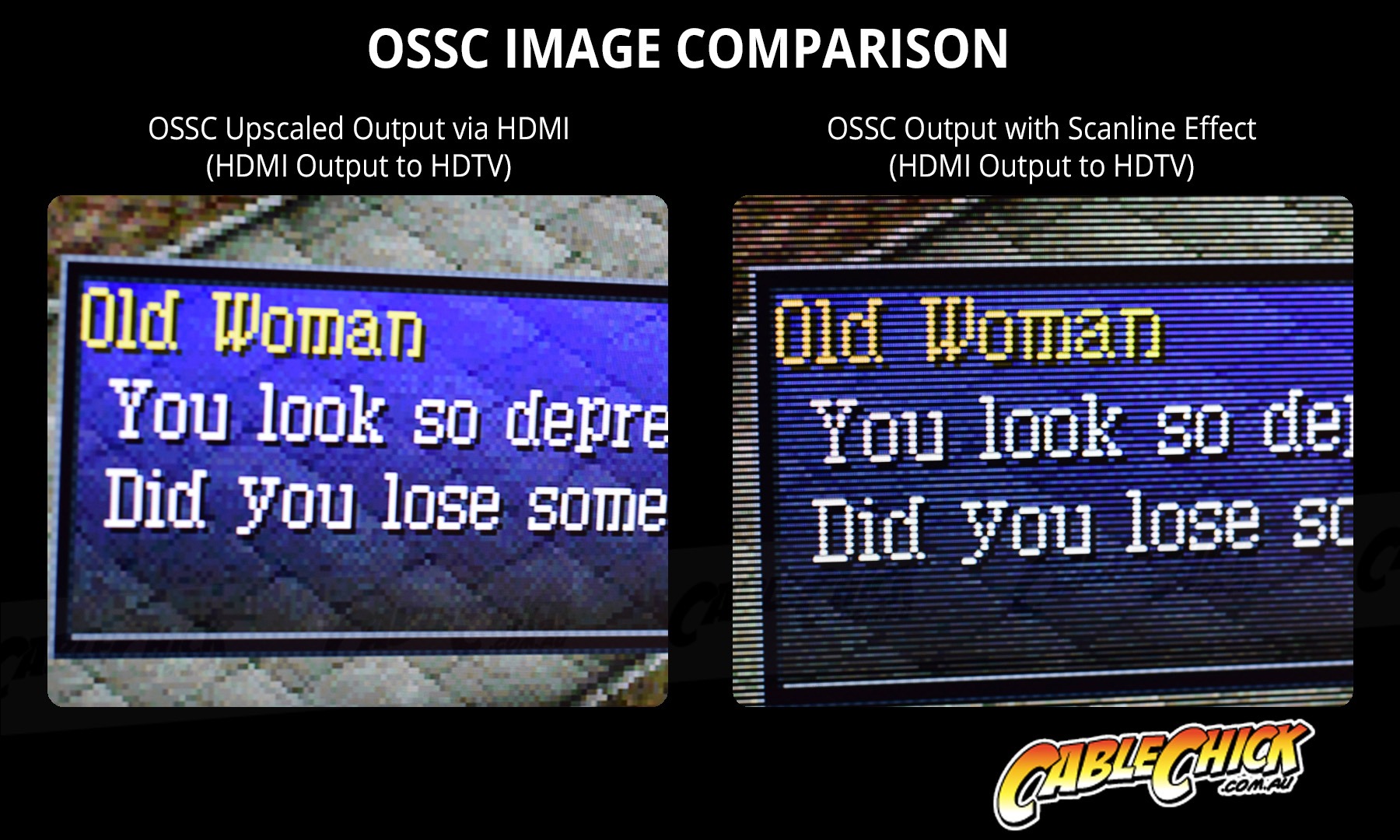 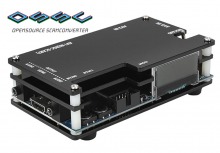 The OSSC (Open Source Scan Converter) is a FPGA Zero Lag Upscaler. If all that sounds a buit confusing, then perhaps think of it as the sharpest way to get an analogue signal from an older video source (like 8-Bit, 16-Bit and 32-Bit gaming consoles), to a new Hi-Defintion TV via HDMI.

The OSSC (Open Source Scan Converter) is a FPGA Zero Lag Upscaler. If all that sounds a buit confusing, then perhaps think of it as the sharpest way to get an analogue signal from an older video source (like 8-Bit, 16-Bit and 32-Bit gaming consoles), to a new Hi-Defintion TV via HDMI.

Quite simply, if you are into playing any retro game consoles from the 80s or 90s on your flatscreen TV, and you care about having the best possible image quality without introducing input-lag, then this is an essential piece of gear for your gaming setup!

Why do I need an Upscaler?

Older game consoles run at much lower resolutions - usually from 240p to 480i/480p - while modern TV's run at 1080p or 4K 2160p! Fortunately, your TV does have a built in upscaler, otherwise you wouldn't be able to send any other resolutions to your screen. Unfortunately, TV manufacturers don't put much effort into their upscaler technology, meaning the upscaled image quality is usualy poor/blurry, and the processing of the image upscaling introduces input-lag... not a good thing when gaming.

So what is Input Lag?

When a TV needs to process the incoming video signal, this causes a delay in the final image being shown on your screen. For watching a movie or TV, this isn't a problem. But when playing a game, having a delay between pressing a button and the image on your TV reflecting that button press, can be critical to the enjoyment of a game!

Input-lag is the amount of time between pressing a button, and that action being reflected on screen. With older retro consoles being analogue, there was vertually no input lag, making games feel immediate and responsive (yay!). However with any digital technology, there is some degree of processing which introduces lag... and the way modern TVs upscale a low resolution signal can introduce VERY noticable amounts of lag :-(

The OSSC excels in this area by using FPGA technology (feel free to read up on it, as the technology is very interesting!), which enables specific yet powerful execution of commands - like upscaling an image - with incredible accuracy and speed.

For those who remember playing video games on an old CRT TV back in the day, you'll remember the natural 'Scanline' effect which was the result of a TV displaying any 240p image. Funny enough, the scanline effect was simply the result of TVs blanking out every second line of a 240p signal to essentally fill the required 480p screen space. The OSSC can now add those Scanlines back into your games, which can be a desired effect when playing a classic console on a modern LCD TV, or even if playing a game on any screen which can't accept a native 240p signal.

Please keep in mind that the OSSC is designed for processing RGB signals from a SCART, Component Video or VGA input source. It is NOT designed for handling a Composite AV (Yellow Red & White RCAs) or S-Video signal. With that said however, you'll find over in our Gaming Cables section RGB video cables for most classic consoles, including the Sega Master System and Mega Drive, 8-Bit NES, Super Nintendo, N64, Gamecube and Wii, plus the first three PlayStation generations (PS1, PS2 and PS3).

So if you're after the very best image quality from your loved console, be sure to check out our RGB cable range.

Composite & S-Video are NOT supported and require a separate adapter/transcoder.

There are no customer reviews yet for this product.
View all home theatre & AV Blogs >>
Posted: 26th Nov, 2007
Question: I have a DVD player which has HDMI output. I have a HDMI to DVI cable as well. Can i use this switch to connect my DVD, then put the pictures on my LCD?
Answer: "Yes. This Switch can accept digital DVI & HDMI connections (via an adaptor or HDMI to DVI cable). You can then connect your LCD Screen to the DVI Output."
Posted: 9th Jan, 2008
Question: Is this box hdcp compliant?
Answer: "Yes it is."

Customer Testimonial
"The service I had with Cable Chick could not have any better. Nothing was any trouble for them, even after 11 months. Thanks again. I will be back!"
Joe, NSW
Did you know Cable Chick also stock Android Accessories?

Customer Testimonial
"The item is amazing and was here much quicker than expected, so I am very happy with your service and have already forwarded your website to other people!"
Dani, VIC