Intercept a HDMI signal and split the audio out into stereo or digital 5.1 surround. 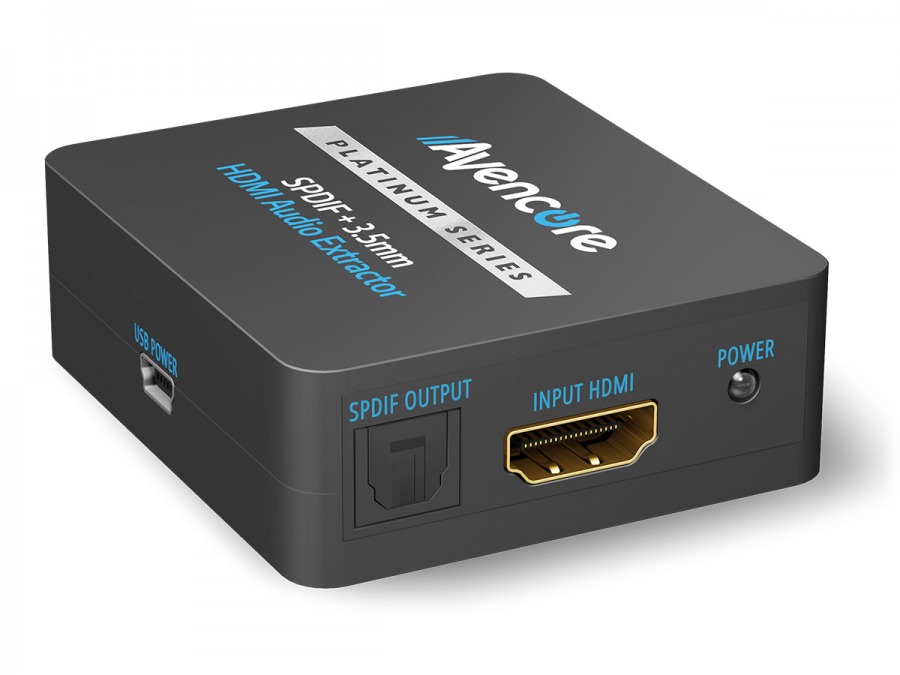 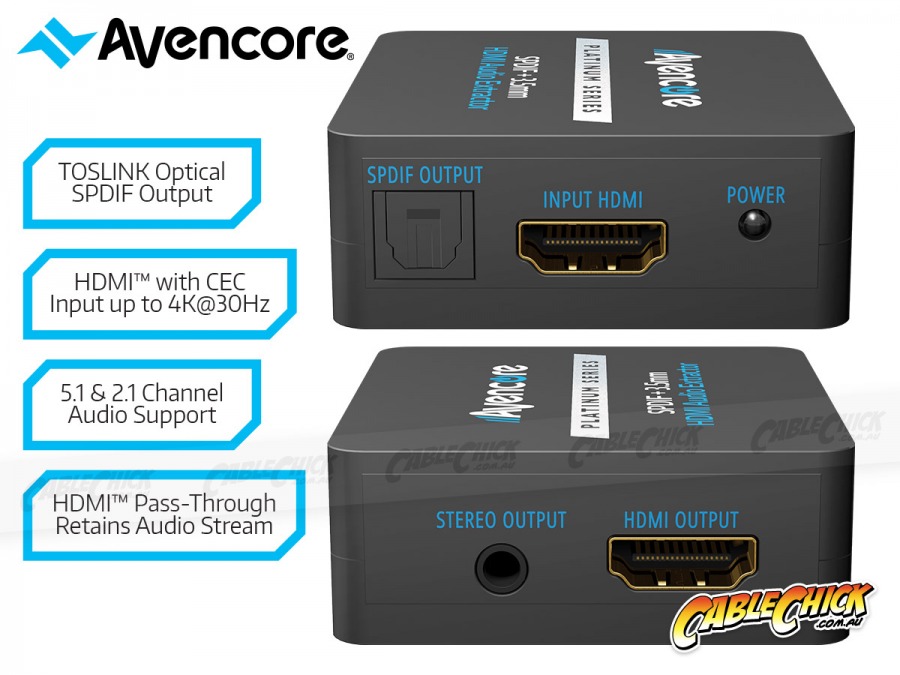 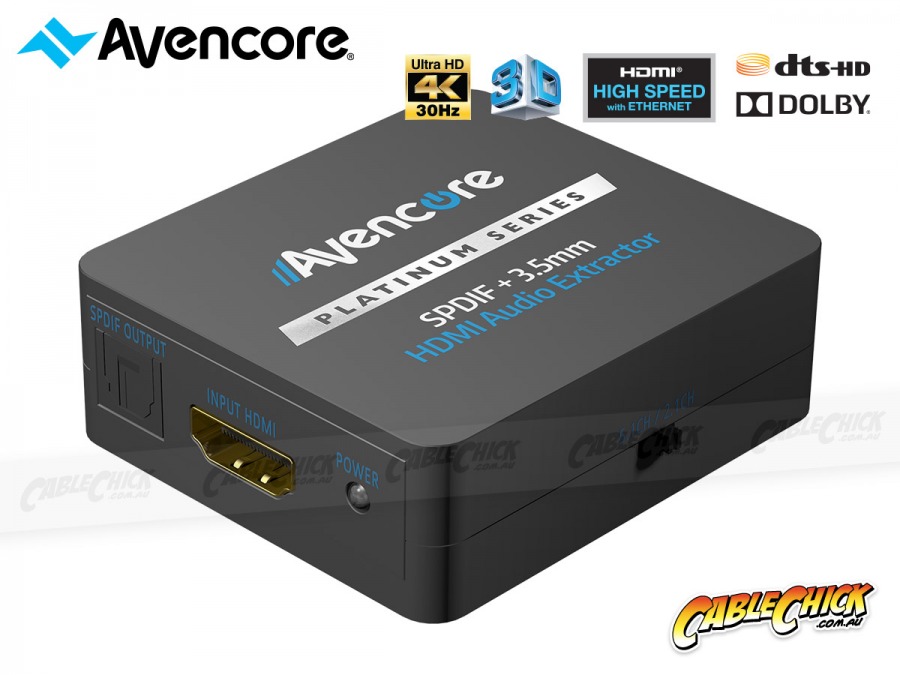 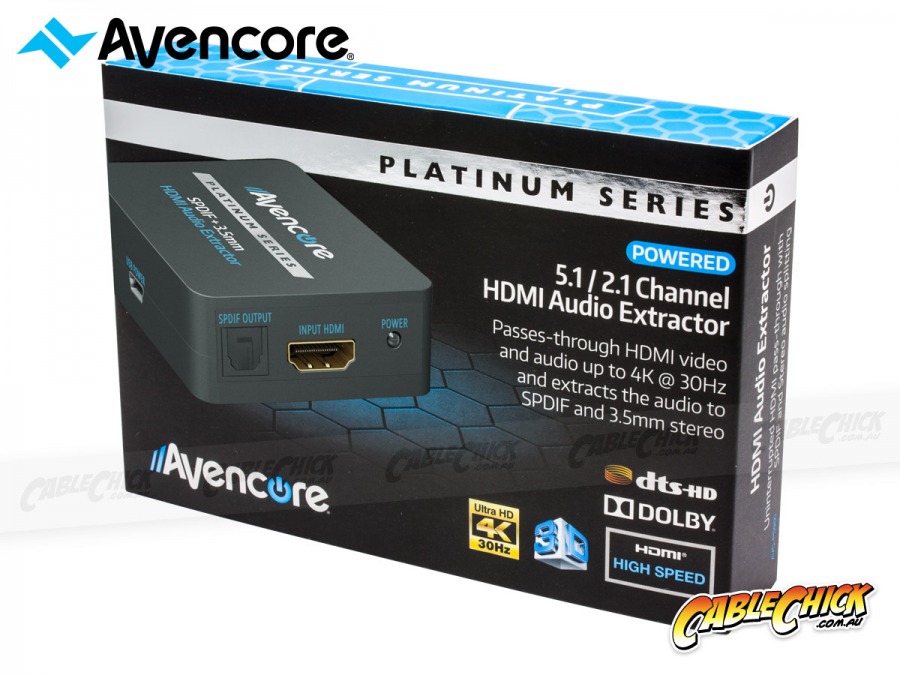 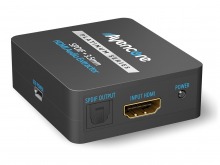 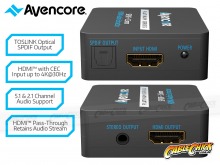 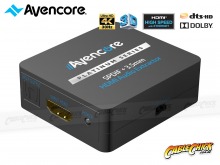 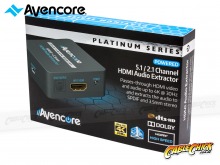 HDMI has been at the top of the heap in terms of audio quality for a while now, but there will always be a need to run audio via SPDIF Optical Toslink or even analog stereo from time to time. This compact HDMI Audio Extractor from Avencore is the easiest way to keep your older non-HDMI audio devices in the home theatre loop.

This little gem will extract most audio formats from your HDMI stream and split it out to digital optical or analog stereo signals. It's compatible with the standard DTS and Dolby 5.1 codecs, and of course LPCM uncompressed stereo. The HDMI signal remains unchanged as it passes-through the extractor, with both video and audio data coming through in addition to the split audio lines.

It also meets the HDMI v1.4a standards, which means 4K support at 30Hz, which is plenty for home theatre Blu-ray and streaming video content at Ultra HD, as well as 1080p 3D and 2D down to standard-definition - it can run with just about anything you throw at it!

Power comes in from USB, and can take power from a wall charger (sold separately) or an available USB socket on your TV, Media Player or Laptop, etc. It can be hidden away behind your other AV hardware, or leave it out to toggle the 2ch/5.1ch selector switch if you input formats vary often.

There are no customer reviews yet for this product.
View all home theatre & AV Blogs >>
Posted: 7th Oct, 2014
Question: Is USB power required for the device to work? If so, what is the input voltage and/or amperage recommended?
Answer: "USB power should be 5V / 500ma. Most powered USB sockets on a wall charger or TV will have plenty of power to operate this device."
Posted: 15th August, 2015
Question: Could I plug my wireless headphone base into this unit and the HDMI from my IQ3 box to my TV?
Answer: "Yes that would work."
Posted: 27th Oct, 2015
Question: Does this product support CEC pass through?
Answer: "Yes, this HDMI Audio Extractor does feature CEC Pass Through."
Posted: 11th Feb, 2016
Question: Does this unit support HD audio formats like FLAC?
Answer: "FLAC is a file format, rather than an audio stream format. Once decoded, it can be transported via any method of digital or analogue means available. This extractor supports the common HDMI audio streams, such DTS Digital, Dolby Digital and LPCM.

For example, if you have a PC which is outputting digital audio over HDMI, you can play any type of file format supported by your software, including FLAC, OGG, MP3 and many more - if your PC plays it, it will be transported over HDMI in the relevant digital audio stream.

It doesn't make a difference which device decodes the FLAC format (PC vs Receiver). Because it is digital, the resulting audio content is identical. Only the DAC which powers the speakers themselves can change the texture of the audio."
Posted: 30th May, 2016
Question: I currently have a Chromecast (the previous black model, not the new colourful round one) which is plugged into an HDMI input on my AV receiver. I have now turned on Zone 2 on my receiver so I can listen to stuff ina different part of the house, but Zone 2 only works with analogue inputs to the receiver. So if I want to Chromecast things to Zone 2 it won't work because Chromecast doesn't output analogue audio. I believe I have two choices:
1) Buy a Chromecast Audio device which does output analogue audio but doesn't support CEC so the receiver wouldn't automatically turn on. Or...
2) Buy your HDMI Audio Extractor.

If I buy your HDMI Audio Extractor will my Chromecast device output digital audio/video AND analogue audio? And will it allow the receiver to be automatically turned on by the Chromecast (as it supports CEC)?
Answer: "Yes. Our HDMI audo extractor passes all the HDMI data through (including audio) as well as duplicating the audio into both Optical and 3.5mms stereo. The extractor also supports CEC, so your Chromecast should behave just as before, except you'll additionally have an analog audio output to use."
Posted: 6th Nov, 2017
Question: If the HDMI is carrying a Dolby Digital Plus or other 7.1 or higher audio stream signal (Atmos?) what signal will be present at the TOSLINK? I understand that TOSLINK cannot hold a DD+ audio stream (only 5.1 DD or DTS)? Thanks?
Answer: "The extractor will ignore audio signals it can't understand. It is not able to perform mixdowns on codecs it doesn't support, so the source will need to change to Dolby TrueHD or DTS Master-HD or similar 5.1 mixes to process sound."
Posted: 10th Sept, 2018
Question: Does this unit work with NVIDIA Shield TV?
Answer: "We haven't tested this unit specifically with nVidia Shield TV, but it should be fine. The extractor passes through EDID information, making it transparent to the source device, and the audio output is handled by the extractor, so it can't influence the attached hardware either. There could be an issue with some protected content, but it would be impossible to say for sure without a Shield to try it on."
Posted: 25th March, 2019
Question: Will this product work powered from the USB socket on a Blu Ray player?
Answer: "Probably, yes. This unit only needs 500mA power, which is USB 1.1 spec delivery and should be offered on all USB sockets. So long as your Blu-ray player has industry standard USB (it should) then it will be enough to power the audio extractor."

Customer Testimonial
"I was absolutely delighted with my 10M TV Antenna Flylead (Male to female), Cheapest price and quicker than expected delivery, would use again with no hesitation. Thankyou"
Jason, SA
Did you know Cable Chick also stock USB Power Banks?